Taking on The Arc50 Cornish Ultra

As we drove down towards the beautiful Minack Theatre in readiness for the toughest run of my life, I reflected on the path that had brought me here. My love of both Cornwall and running has grown at an equally rapid pace in recent years, so when ‘Brutal Claire’ mentioned a Cornish ultra-marathon whilst interviewing her on the TRIBEathlon podcast, I knew this was the one for me.

Considered one of the toughest ultras in the UK, the 100-mile Arc of Attrition was certainly beyond my capability, but I thought that the 50-mile Arc50 might just be in reach. I’d previously run the required qualifying distance (50 km), and knew the coastline and terrain well, but this was going to be a tough first official ultra-marathon to attempt. 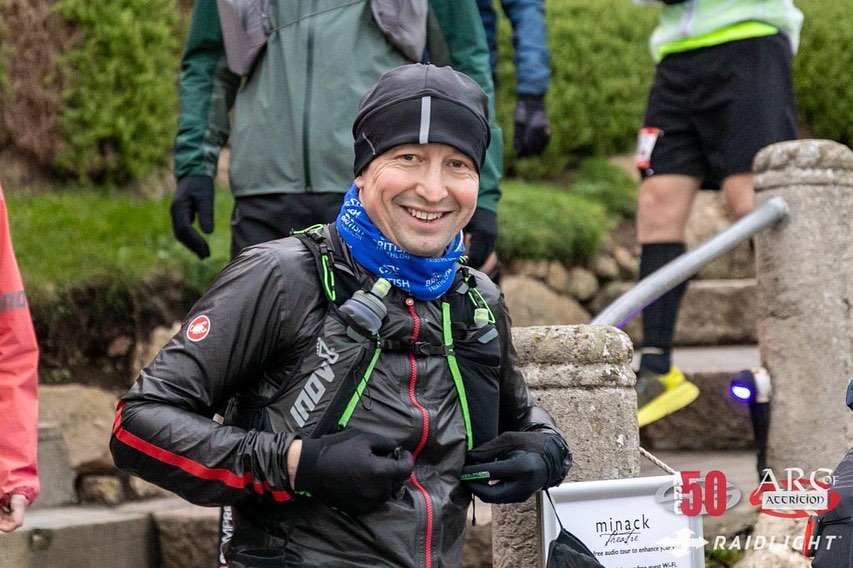 The 2021 race sadly didn’t happen, but having done the training I knocked out my own ‘staying local ultra’, clocking up 50 miles, whilst never leaving a 15-mile radius of the house. The ‘Rutland Ripple’ is, however, no match for the rugged Cornish coastline, so I knew the real thing was going to be a much tougher ask.

The Minack Theatre couldn’t be a more perfect setting to start the race. It is an open-air theatre, constructed above a gully with a rocky granite outcrop jutting into the sea. The theatre is at Porthcurno, 4 miles from Land's End. The theatre was the brainchild of Rowena Cade, who having moved to Cornwall after the First World War, carried rocks up the steep cliff to create the stage and seating. The result is the simply stunning open theatre with unbelievable views out to sea.

So, back to the day. As the countdown began, the tension built as flairs streamed, the waves crashed against the cliffs below us, and the bearded drummer hammered on the skin. Before I had time to think about what was ahead, we were off. Straight up the sheer climb back out of the theatre.

You can’t win an ultra-marathon in the first 10 miles, but you can definitely lose it; not that I had any illusions I was going to be winning this thing! I’d been full of a cold in the days leading up to it, so a nice gentle start was what was needed. My TRIBEathlon co-host Claire Fudge of 4th Discipline and I made sure that neither rose to the temptation of flying out of the blocks on the back of our adrenaline rush. 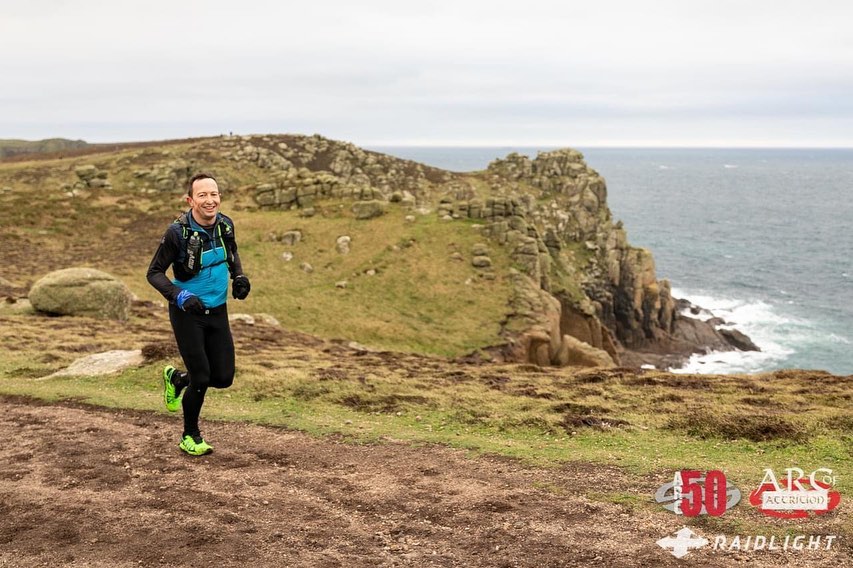 The early stages of the run are stunning. The coves of Nanjizal and Sennen, north and south of Land’s End are breath-taking. Remembering to take in the views was challenging, however as the terrain was tricky right from the off, and you had to watch every step. This became even more apparent when I went over on my ankle twice in the first 10 miles.

In a 50-mile run, you expect some dark moments, but not as early as mile 13. I started having a serious sense of humour failure, as Claire described it. My chest became tight, by calf and hamstring started cramping and my stomach didn’t take to eating solid food to break up the monotony of my gel intake. Between miles 13 and 18, I genuinely didn’t think I would make it half way.

Fortunately, we had our incredible crew on hand to rescue the situation. Warren & Erica Pole run sports superfood nutrition brand called 33Fuel. Warren had featured on the TRIBEathalon podcast, where he shared his enthusiasm for fuelling endurance healthily, and his wisdom of 35 ultra-marathons. Joining them was Kerry Sutton of Perpetual Motion Coaching and James Eacott. James is a highly accomplished Ironman, with a fastest time of an incredible 9 hours 7 minutes. Kerry, again a podcast guest, is a highly accomplished ultra-runner, having run everything from 215 miles across Scotland last summer, Marathon Des Sables twice, the jungle ultra in Peru, and the Spine Race, to name but a few. A more amazing crew we could not have asked for. 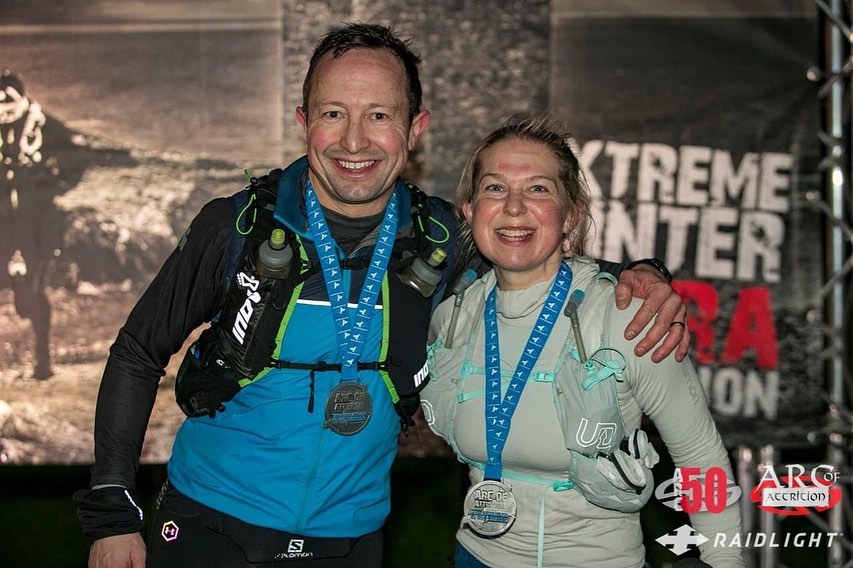 To get me out of the dark times, I needed to change something quickly. A cocktail of Sudafed, paracetamol, caffeine and more palatable gels, combined with the most tricky terrain of the entire run, got me back on track. My stomach, chest and cramps eased whilst negotiating the boulders, climbs and scrambles of the most stunning stretch of the run, from Pendeen Mine to St Ives, taking you past Gurnards Head and the quaint village of Zennor. Eventually, St Ives appeared on the horizon, the mental halfway point, as it feature the one and only feed station.

Claire and I hadn’t run together before, so whilst we said we’d set off together, we were both expecting one or the other to disappear off into the distance. This happened, but we regularly caught back up with one another. It turned out that I was faster on the downhills and technical terrain, although Claire was quick to point out she was holding back to protect her dodgy ankle. When it came to the climbs and flat sections however, there was no stopping her. She would come bounding past everyone around her. So, as it happened, one of us would stride off ahead for long sections, but sure enough, like a bad smell you couldn’t shake, the other would appear again right behind them. As we approached the stunning and unusually quiet St Ives, I’d opened up a healthy lead over Claire on a long downhill stretch, but within 30 seconds of me arriving into the feed station, she had reeled me in again.

St Ives was followed by a run through Carbis Bay and past the venue of the recent and controversial G7 summit. We again met our loyal crew, and headed off onto the only real stretch on the road, taking us round the sand flats to Hayle. After a quick crew stop, we donned our head torches and headed out into the ‘Dunes of Doom’- a long stretch of sand dunes that runs behind Gwithian Beach and up to the iconic Godrevy Lighthouse. Named as a result of the tricky navigation and soft sand, the coastal path meandered between the dunes, with opportunities to go wrong at almost every stride. Claire disappeared off into the distance, for what I thought would be the last time, only to be blindsided by her watch, the key to successful navigation, running out of battery. Thankfully, I closed the gap between us, and keeping a close eye on my trusty Garmin watch kept us both on course.

There was no opportunity to take in the lighthouse view, as by the time we reached it we were running in complete darkness, only seeing what lay ahead in the arc of our headtorch lights. The stretch to Portreath from here seemed to go on for an eternity, but eventually we descended down into Portreath, the penultimate village. We met our trusty crew again, restocking and grabbing our poles. Much debate had been given to whether to run with poles or not, but thank goodness we took them for this last, horrific stage that I knew was going to truly finish off my legs.

Portreath to Porthowan is home to the steepest climbs of the whole route. Known as Sally’s Bottom, 2 brutally steep up and downs using knee high steps was certain to finish off our already broken quads. Thankfully the poles took some of the strain on the way down, and helped propel us up the ascent. Again, Claire disappeared off ahead, only to be flawed this time by a dodgy headtorch. I joked afterwards that it was only thanks to her failing technology that I had been able to keep up with her.

The Arc wouldn’t be the Arc without one last surprise. After heading down into Porthtowan, you could easily be mistaken into thinking that the work was now done. But no, there is one last surprise for you ahead. As you leave the village headed for the Ecopark, you ascend an incredibly steep and slippery footpath, just in case your quads were not completely trashed by that point. So, 12 hours and 53 minutes after leaving the Minack Theatre, my co-host and I almost crossed the line together; Claire ducking for the line to take a 1 second win.

Since completing the Arc50, people have asked me what is next, and here has been my answer. At 13 miles I didn’t think I would make halfway. At halfway I decided I could get round, as long as I made the cut off times. At 45 miles I knew I had it in the bag, even if I had to walk the rest, but I swore blind there was no way on earth I would consider doing a 100 miler. By Monday, I was researching 100 milers! So, watch this space.

People have also asked how I trained for this. Honestly, I think the longest training run was 21 miles, so it really wasn’t any different to my normal training regime. Some shorter, fast runs, some longer, slow runs, and some swimming and cycling to improve the endurance engine. It’s amazing what the compounded effect of good health and fitness can deliver. With good technique to avoid injury, an incredible crew to support us, a good engine and a positive mindset, it really is astonishing what the body can do.

This certainly won’t be my last ultra. It was an incredible experience with wonderfully friendly people. It gives you an awesome opportunity to see vast sections of landscapes that would normally take you days, week, or even years to explore. When else do you get to see 50 miles of some of Britain’s most spectacular scenery all in one day?

A few days later and the legs have recovered, and it is a race between whether the one blister I have will depart before a couple of my toenails, but the mental imprint of this day will stay with me for a very long time. If you too can combine (ultra) running with a part of the world that is special to you, take the opportunity. You won’t be disappointed. 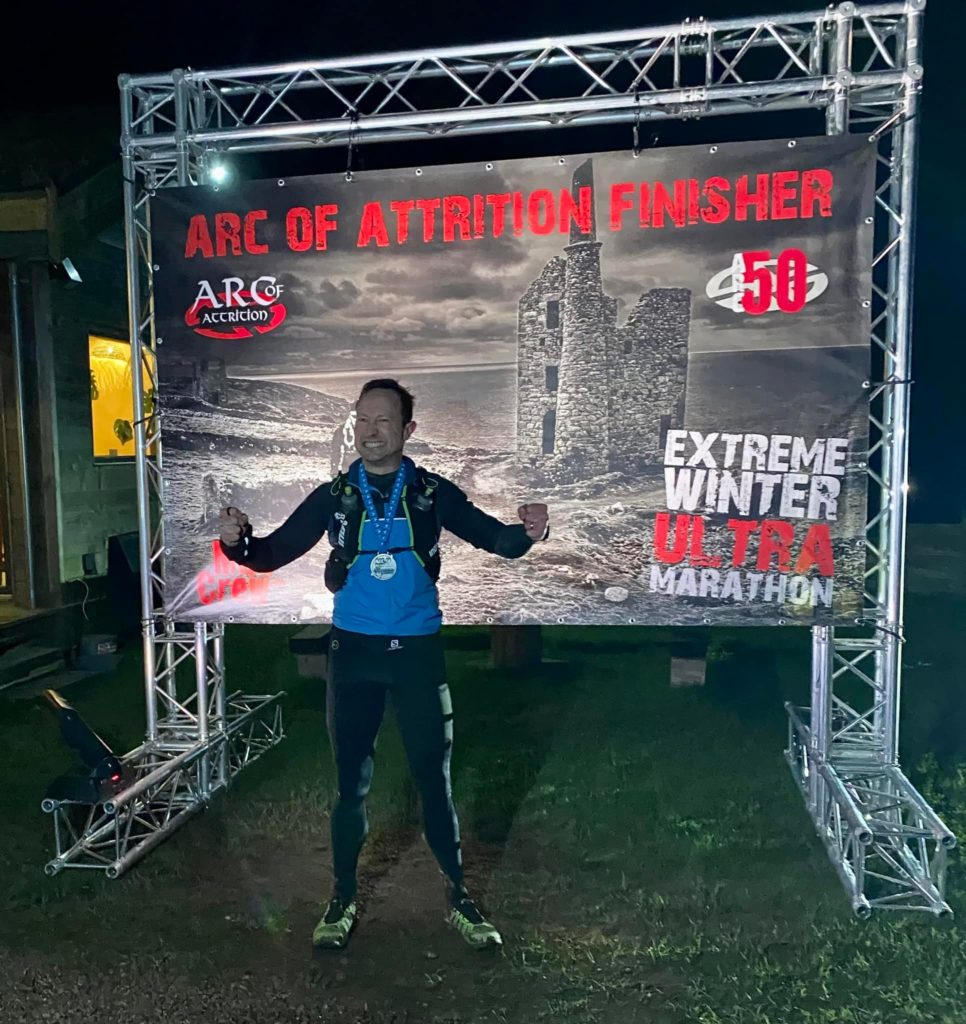 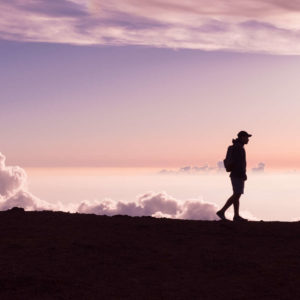 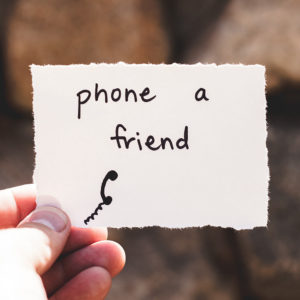